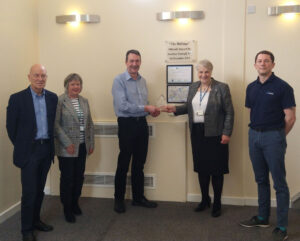 Dreamdrops were delighted to present their first Community Award to idash Ltd.

This new award recognises individuals, families and organisations who go above and beyond in either helping to raise funds for ‘Dreamdrops’ or providing exceptional support to the charity, which can go a long way to relieving the stress of a child being nursed either in hospital or in the local community, at what can often be a difficult time for the whole family.

During the second Covid lockdown last year, ‘Dreamdrops’ decided to organise, what turned into a whole community project, to provide computers and tablets to school children across Huntingdonshire who were having to be “home schooled” during the pandemic but did not have access to I.T. equipment.

Working with local partners idash Ltd and Cambs-Pat UK Ltd, along with local community support groups across the market towns in Huntingdonshire, (Huntingdonshire Community Group, Ramsey Neighbourhoods Trust, the Riverport Women’s Institute in St Ives, and St. Neots Community Support), the Rotary Club of Huntingdon (Youth Group), the Rotary Club of St Marys St Neots (President’s and Youth Funds), Argos and also supported by members of the public, who generously donated their used machines, together we were able to provide laptops and tablets to all the schools that urgently needed them.

Anne-Marie Hamilton, Chairman of Dreamdrops said: “Whilst we are incredibly grateful to everyone who pulled together to make the project such a success, one company stood out, as not only did they provide the project with engineers working on it full time for three months, but they also salvaged spare parts from redundant machines that could not be updated and re-used them to repair and upgrade other machines, thus saving the whole project thousands of pounds. In addition, they freely provided technical help and expertise, and were constantly on hand to give support when needed.

“Their commitment to supporting local children with their schooling at such a difficult time for so many, was overwhelming, and this is what earned idash Ltd the first Dreamdrops Community Award.” 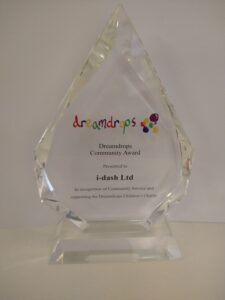 “idash joined forces with Dreamdrops and took the 100’s of laptops and devices provided by the public and local businesses, carried out the relevant data protection actions, and refurbished the devices and made them usable again.

“This is a lovely surprise, and it is a fantastic feeling to receive the first of these awards.” 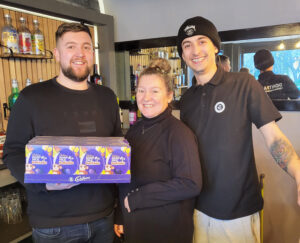 Jordan Mason, ‘Dreamdrops’ committee member and his mum, Sharon, from Don’t Panic Pizza, donated an amazing 48 Easter eggs for children who are being cared for in the community by the Cambridgeshire Community Services NHS Trust’s Specialist Community Nursing team.

Jordan said: “Dreamdrops is a phenomenal local charity with an outstanding committee, an organisation that shows strong leadership and team work to deliver on the promise of making a real difference to the children and families who they support.

“Supporting people in times of need and hardship is something all of us at Don’t Panic care about deeply, which is why they are our charity of choice this year. A few easter eggs is the least we could do to show our support. We look forward to working closer with all at ‘Dreamdrops’ moving forward.”

Anne-Marie Hamilton, Chairman of ‘Dreamdrops’ said: “What a wonderful surprise for so many children to receive one of these lovely Easter eggs.  Some of the children are not able to be out and about in the community due to their poor health, and this often means they miss out on many things in life that we can take for granted.

“To know that Jordan, his mum and everyone at Don’t Panic Pizza have thought of them will mean a huge amount to the children and their families.” 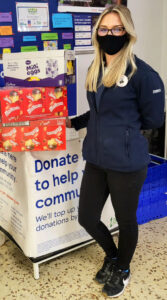 ‘Dreamdrops’ also received a second donation of 27 Easter eggs from Tesco, Sapley, Huntingdon. Their kind donation will be passed to the children at The Collins Club.

Anne-Marie continued: “The second donation from Tesco will be passed to The Collins Club, a support group we provide to local families with autistic children.  This will be a lovely gift for them to receive and we thank everyone at Tesco for thinking of them.

“For those children who are unable to have Easter eggs, ‘Dreamdrops’ has provided some fluffy easter bunnies and toys to make them smile.” 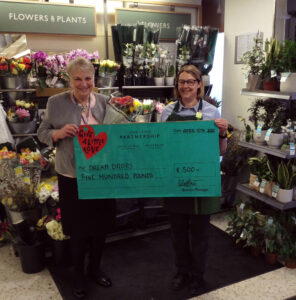 A huge thank you to Waitrose in St Ives for their wonderful donation of £500.

The donation was supported by the Waitrose Community Matters Campaign as part of their Health and Wellbeing concept.  After finding out about Dreamdrops they wanted to help support local children both in hospital and in the community. 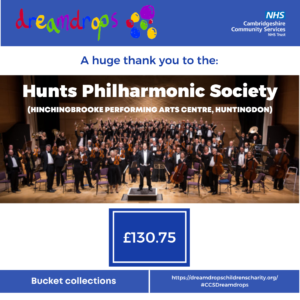 he Hunts Philharmonic held a second concert at the Hinchingbrooke Performing Arts Centre, Huntingdon, in March and £130.75 was raised through bucket collections.

Another spectacular event, enjoyed by all.

Thank you to Christine Luckham, Sianade Bell and Pauline Rawlings for giving up their Saturday evening to help raise money for dreamdrops. 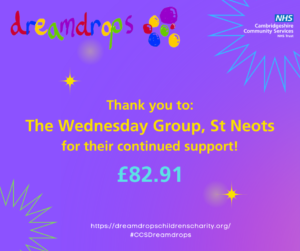 In February Anne-Marie Hamilton, Chairman of dreamdrops gave a talk about the charity’s work to the ladies of The Wednesday Group, who meet in the Community Room at Hanover Court, Eaton Ford near St Neots.

They kindly donated a collection of £82.91 from that morning to dreamdrops, thank you ladies for your continued support. 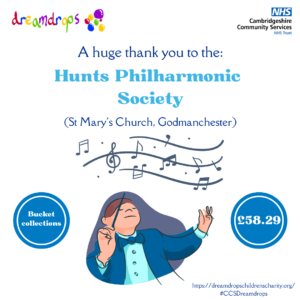 Thank you to Mike Andrews, Martin Becker and his wife Josephine, for looking after the bucket collections at the Hunts Phil Concert, held in March, at St Mary’s Church, Godmanchester.

The concert was a huge success, and the Hunts Phil gave a wonderful performance!

Jacqui Round, head coach at St Neots rowing club said: “We raised money for dreamdrops, as we wanted to support a local charity who may have been hit hard during Covid and also a charity who work with local children.”

Anne-Marie Hamilton, Chairman of Dreamdrops said: “Many congratulations to everyone who took part in the Rowing Marathon. It must have been incredibly hard to keep going at times – particularly in the small hours after midnight!

“I am not surprised that you all felt extremely sore and tired afterwards, as it is a tremendous feat. I hope that you all also felt a terrific sense of achievement too, as you certainly should, after such an amazing undertaking. The money raised will be used to provide specialist sensory equipment for the Paediatrics Emergency Department at Hinchingbrooke Hospital.

“We cannot thank you enough for doing this for ‘dreamdrops.’ When we saw how much you have managed to raise, we were absolutely stunned. It is truly wonderful! 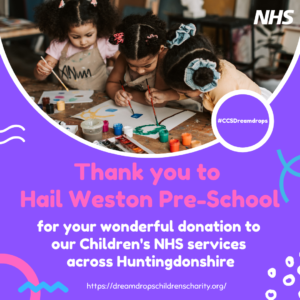 A huge thank you to Hail Weston Pre-School for their fantastic donation of equipment and supplies to our charity Dreamdrops.

Sadly, Hail Weston Pre-School closed their doors during the pandemic, but they wanted to make sure that local children would benefit from their amazing donation.

The wonderful selection of items donated will hugely benefit local Children’s NHS services across Huntingdonshire.  We cannot thank them enough for thinking of Dreamdrops! 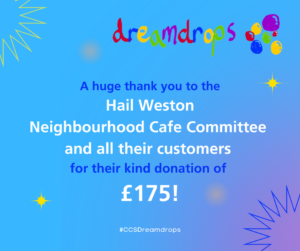 HCRfm104 make Dreamdrops their charity of the month for February!

We are thrilled to announce that Anne-Marie Hamilton’s, Chairman of Dreamdrops, interview with HCR104fm will be broadcast on Friday 11th February at 7pm.

The interview will also be available via the internet, by visiting: www.hcrfm.co.uk and pressing the Listen Live button.  After the broadcast, the programme can be heard by going to the website’s “Listen Again” facility and scrolling through to 11th Feb at 7pm.